Tom Cruise and Katie Holmes spent the weekend at home in NYC, though they went their separate ways on Friday. He took the stage at Matt Lauer's roast, cracking jokes in front of a crowd that included Donald Trump and Katie Couric. Many of you don't think Tom has really lightened up since his famous on-air fight with Matt in 2005 but this time the boys were laughing about glib jokes and booster seats. Meanwhile, Katie was busy attending her weekend performances of All My Sons but found plenty of time for sweet Suri. The mother-daughter duo paid a visit to Central Park, where they hit the jungle gym and played with chalk between cute kisses. 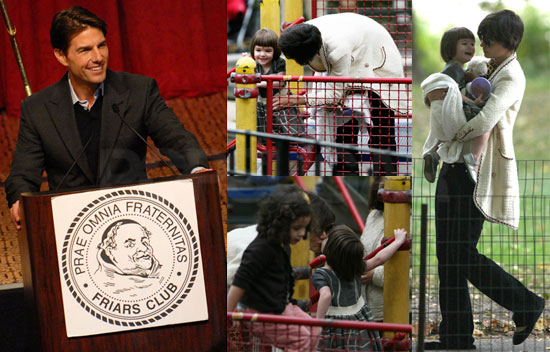 To see more photos of Matt and Tom making up and 25 photos of adorable Suri playing with Katie at the park, just read more.