David Beckham was on daddy duty carrying Romeo and Cruz on errands in LA while Victoria was in Boston for another round of American Idol auditions on Friday. Posh is temporarily sitting in for Paula, who apparently may be back on AI but is also looking into a possible variety show. Back in LA, David was causing trouble on the soccer field. The Galaxy lost their home game on Saturday, no thanks to David, who was issued a red card and thrown out of the game after only 16 minutes of play. He is still being greeted by boos all over the country so it's no surprise if he has some aggression to get out when he puts on his uniform. It wasn't much of a game for Becks, but one place he is still in the running is our shirtless bracket, where he's run into some surprisingly stiff competition from Shia LaBeouf — vote on all matchups now! 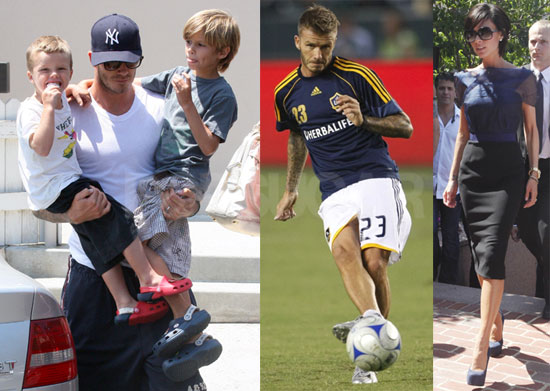