Anne Hathaway stopped by The Late Show yesterday and soon as David Letterman was done complimenting her glowing appearance — which she attributed to quitting smoking, drinking and becoming "vaguely vegan" — he grilled her about her ex, Raffaello Follieri. Dave told her to stop him when he crossed the line, but she held her own as he asked her everything from how long they knew each other to whether he ever stole things out of her purse. She claimed not to know the details of his jail time or case, though she'll probably see the headlines when he's sentenced this Friday. Anne has spoken up about her ex before, but last night she was able to joke about "crashing and burning." With the actress getting so much praise already for Rachel Getting Married and a new project in the works, hopefully Anne is staying happily distracted. 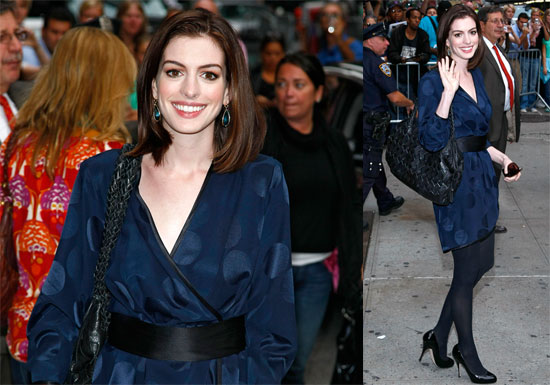 To see the video of her interview and more photos just read more.

Anne HathawayThe Late Show With Stephen Colbert
Around The Web

Anne Hathaway
Why Yes, Queen Anne Hathaway Dressed to the Nines For Her Virtual Movie Premiere
by Victoria Messina 16 hours ago

The Tonight Show Starring Jimmy Fallon
Yep, Even Anne Hathaway Relies on the Ol' "Santa's Watching" Trick to Discipline Her Kids
by Victoria Messina 1 day ago