This weekend Madonna prayed with her family and Jesus Luz at the Kabbalah Center before taking the stage at the O2 arena for her Sticky & Sweet tour. Her concert included a tribute to Michael Jackson where she stood with her backup dancers cheering on an MJ impersonator that performed all his signature moves. Madonna shouted, "Let's give it up to one of the greatest artists the world has ever known!" — check out the video below. The singer was distraught when Michael passed away but is doing her part to preserve his memory and honor him on the same stage where he was scheduled to perform his comeback. Many fans will have the chance to pay their respects when his public memorial is held at the Staples Center. 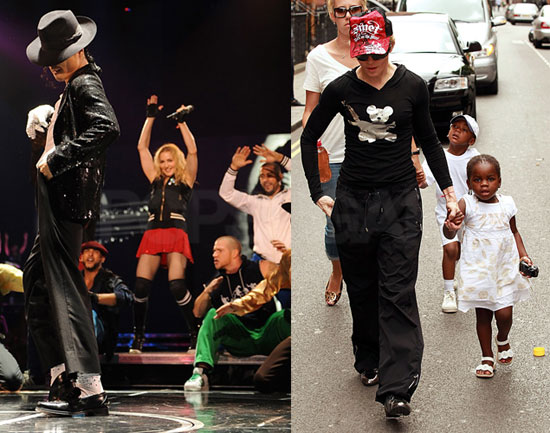 To see more photos of Madonna with her kids, performing, and the video of her MJ tribute just read more.