The stars gathered in LA last night for the BET Awards where they paid tribute to Michael Jackson. Joe was on the red carpet talking about how much Michael would have appreciated the outpouring of love and support and once the show started Janet took the stage on behalf of the Jackson family. She said, "My entire family wanted to be here tonight, but it was just too painful so they elected me to speak with all of you. I would just like to say that to you, Michael is an icon. To us, Michael is family, and he will forever live in all of our hearts. On behalf of my family and myself, thank you for all your love; thank you for all your support." Jamie Foxx performed "I'll Be There" and showed off his attempt at MJ moves to "Beat It." The red carpet was full of beauty highlights and other performances included Beyonce Knowles and Jay-Z, but there was no question that the night belonged to Michael amid so many rumors and stories surrounding his untimely passing. 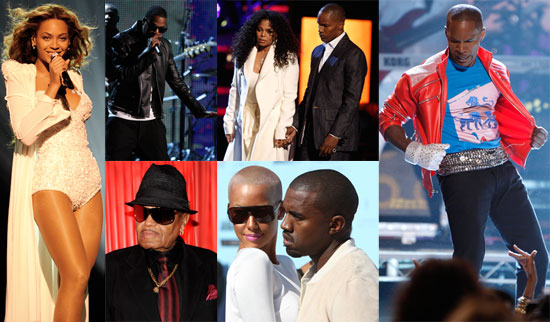 To see video of the MJ tribute plus more photos from the night including Zoe Saldana, Tyra Banks, Alicia Keys, Ciara and others just read more.

Celebrity News
Can't Keep Up With Kim Kardashian and Kanye West's Divorce? Here Are All the Details
by Corinne Sullivan 4 days ago