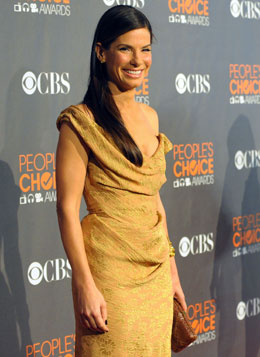 Sandra Bullock has spent the past few months far away from LA after the madness of award season. Instead, she and baby Louis have been exploring their home in New Orleans and more recently, Austin. This week, her ex husband Jesse James opened up to the press about his affairs in his first interview since his scandal broke, and according to rumors Sandra might be ready to make another public step forward as well.

The Oscar winner is apparently considering attending the MTV Movie Awards on June 6, where she's a four-category nominee. Sandra's a worldwide favorite — and a PopSugar 100 finalist! — but fans have also been careful not to pressure her to come back too soon. So tell us, would you be excited to see Sandra's return at the MTV Movie Awards?