Angelina Jolie brought her four oldest kids, Maddox, Pax, Shiloh, and Zahara, to see Brad Pitt as he filmed Moneyball in Oakland, CA, yesterday. Brad held hands with Shiloh and Pax while dressed as his character Billy Beane at the city's baseball stadium, while Angelina stuck with Zahara and Maddox. The real Oakland As are also in the middle of their season, and player Brett Anderson spotted the Jolie-Pitts taking family photos during their afternoon on set. Brad, Angelina, and their kids are settling into their temporary East Bay home, getting situated at their hotel and starting to explore their toy-shopping options. 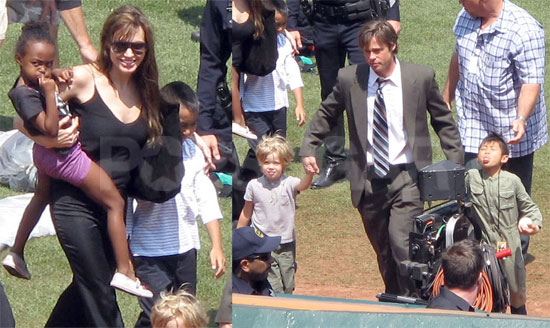 Samira Wiley
Samira Wiley and Lauren Morelli Welcomed Their First Baby, and Her Name Is My New Favorite
by Alessia Santoro 2 days ago

Babies
Alexa and Carlos PenaVega Are Now Parents of 3! "Little Rio Could Not Wait to Come Out"
by Alessia Santoro 5 days ago

Kylie Jenner
Kylie Jenner and Stormi Wore Matching Rainbow Bikinis, and It's Too Cute to Handle
by Nikita Charuza 6 days ago