Angelina Jolie, Shiloh, and Zahara touched down in London this morning, coming off the long flight from Los Angeles. The trio were also hand in hand at LAX last night on their way to their adventure. Shiloh's latest expression of her "Montenegro style" included unlaced combat boots to go with her stuffed-animal backpack, while Zahara looked too cute in her Mary Janes and yellow cardigan. Angelina has been piling on the new movie projects this Summer, most of which will showcase her dramatic side rather than gun-slinging skills. Still, she's dominating BuzzSugar's Kickass Female Character Bracket as her Lara Croft in Tomb Raider, Fox from Wanted, and Jane from Mr. and Mrs. Smith are all still in competition! Her next badass film is just around the corner since the trailer for The Tourist was just released, and Angelina and Johnny Depp look smoking hot in the upcoming thriller. 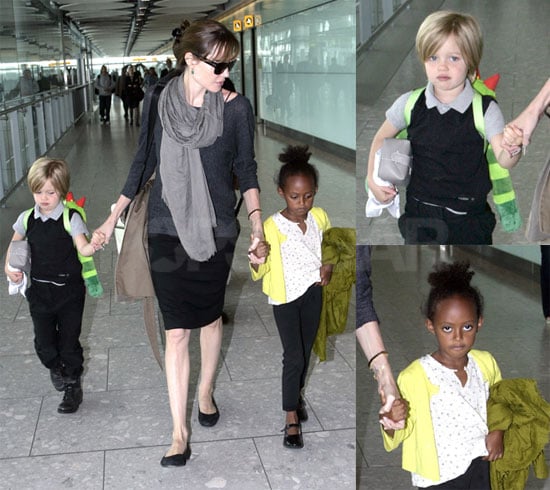