Anne Hathaway showed off a short pixie cut hairdo on the set of One Day with her costar Jim Sturgess in Paris this morning. The chopped-off locks quickly made headlines, though she assured Us Weekly that it's just a wig. She and Jim have been filming the adaptation of the popular Summer must read for the past few weeks, and the producers should be happy to see that Anne was just named one of the top bang for your bucks actors. She's also already getting award season buzz for her role in Love and Other Drugs where she finds herself in an intense emotional relationship with leading man Jake Gyllenhaal. 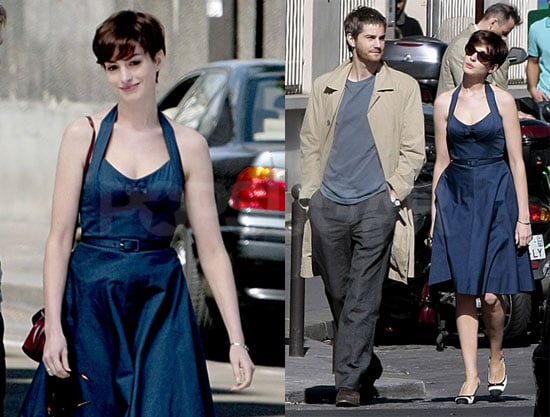 Anne Hathaway
Anne Hathaway Apologizes For Disability Depiction in The Witches: "I'll Do Better"
by Brea Cubit 2 weeks ago

Anne Hathaway
It Took 140 Wigs and Over 1,000 Pairs of False Eyelashes to Create the Characters in The Witches
by Sophia Panych 3 weeks ago

Parenting Humor
Anne Hathaway's Response to Having More Kids: "I Didn't Mean to Blink My Thoughts Out"
by Murphy Moroney 4 weeks ago