Brooklyn Decker celebrated winning Esquire's Sexiest Woman Alive title by heading out to buy groceries on Friday afternoon. She has a little downtime after wrapping work on Just Go With It in Hawaii and before heading to London to watch her husband Andy Roddick compete at Wimbledon. Brooklyn's staying busy doing a little promotional tour as the face of Gillette's Venus razors, and we chatted with her earlier in the week about her new career as an actress. She had nothing but praise for her costar Jennifer Aniston, but Brooklyn also touched on shooting with Adam Sandler, her expertise on wearing a bikini, and whether or not she'll challenge her husband to a match of tennis. Brooklyn said: 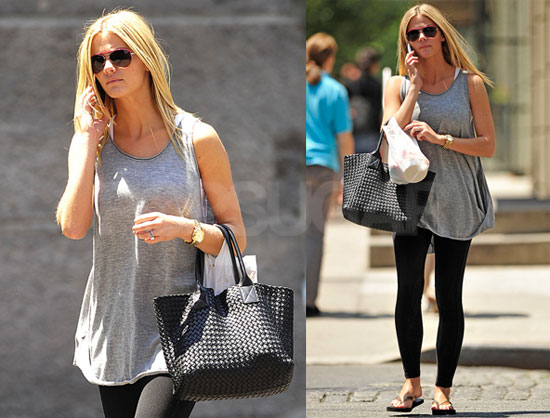 PopSugar: What was it like working with Adam Sandler and Jennifer Aniston in Hawaii?
Brooklyn Decker: We spent breakfast, lunch and dinner together. People don't realize the hours on set are so long — we worked 16 hours a day. So you're with this group all the time, but we'd have group dinners and it was really nice. It was a really good family environment. We were all in Hawaii so it was sort of like movie boot camp!
PS: Were you there when Heidi Montag shot her scenes?
BD: I was on set! She's amazingly sweet. She's really sweet and actually played her character so well — she's very funny, she's surprisingly funny. She's a true sweetheart, she was a really good girl on set. . . you get to see a really comedic side of her, and she's really good at it.
PS: Was it comfortable shooting in your bikini?
BD: [The producers] were like, 'Oh, this is more the costume you're used to. . . ' I did some bikini scenes, and they were funny! It's going to be funny when people see the actual movie come out, because I know pictures came out and you see girls in bikinis and you instantly think, 'Whatever.' But when the movie comes out you see it's in a very funny way and we're poking fun at ourselves. It was fun. I definitely upped the training for that scene!
PS: Do you ever challenge Andy to a match of tennis?
BD: No! I stick to modeling. I let my husband stick to his craft. He's pretty good at it, so I'll let him be the tennis player in the family. I just stick to taking pictures . . . and getting photoshopped!

To read what Brooklyn has to say about working out with Andy and what's on her iPod, just read more.

PS: What do you work out to?
BD: Everything from Jay-Z, I have U2, the Killers. . . I have Taylor Swift, good music and bad music — anything really that has a beat and will keep me moving. Jay-Z and Black Eyed Peas are big ones.
PS: Do you ever work out with Andy?
BD: I train with my husband's trainer, and he trains athletes so he puts me through an athletic workout, which is really cool. In no way shape or form could I ever keep up with a professional athlete, since I'm a model and not an athlete, but I like to pretend that I do their workout. So I do a lot of hurdles and medicine ball work, a lot of track work. It's really stimulating. It's really fun.