Fashion's Night Out takes over NYC and cities around the world on Friday, and some very stylish stars helped kick things thing off at the runway show yesterday evening in Manhattan. Blake Lively and Leighton Meester posed and represented the Gossip Girl cast, who will be taking things to an even more couture-filled level when the series kicks off season four in Paris next Monday. Leighton twittered her excitement for fashion week on her way. Bar Refaeli looked stunning in her flirty party dress while Ashley Tisdale took a break from shooting Hellcats and promoting it before the premiere tonight. FNO marks the official start of New York Fashion Week and Fab, Pop, Bella and the newly-redesigned Fashionologie will all be reporting from the shows, parties, and events the whole time! 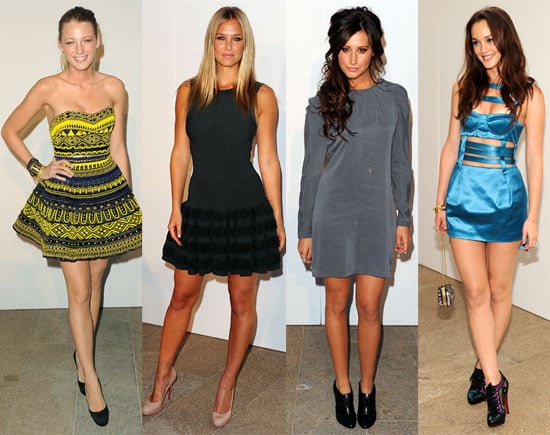 Once inside, Blake took her seat next to Anna Wintour, who the actress recently gushed about in Marie Claire UK. The friends chatted throughout the giant exhibition, where tons of models strutted around the concentric circles of the huge catwalk and gave many onlookers front row seats to the action. Pharrell gave a surprise performance during the show, which included appearances by some of the world's biggest supermodels like Gisele Bundchen. Gisele sported the FNO t-shirt, which is also available in your closet and catalog on PopSugar's Retail Therapy with all proceeds going to the New York City AIDS fund! You can also get your store ready for NYFW with all the new themed goodies so play now! Gisele changed into a gown to finish off the spectacular event, as she and a few other handpicked models climbed onto a double-decker tour bus and rode off into the night. The action is just getting started so stay tuned for the news, trends, runway pictures, and famous faces throughout NYFW! 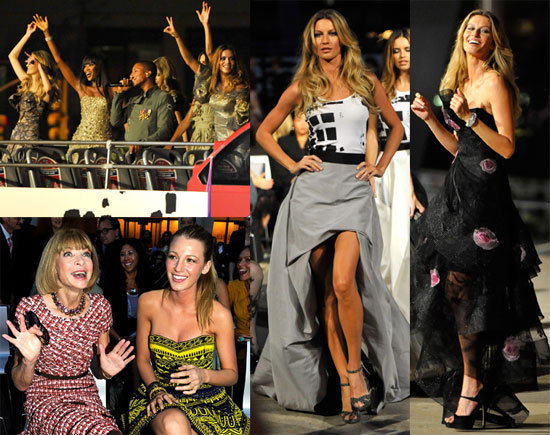