Brad Pitt waved to fans as he departed The Grove in LA yesterday after taking Zahara to the American Girl Place, where his friend Chris Cornell hosted a birthday party for his daughter Toni. Zahara, her sister Shiloh, and mom Angelina Jolie are all home again in California following their getaway to Europe last week. Brad, meanwhile, stuck closer to home with his four other children and continued filming Moneyball. Angelina is also in the middle of her own film project, as she's directing a love story set during the war in Bosnia and has already started casting. 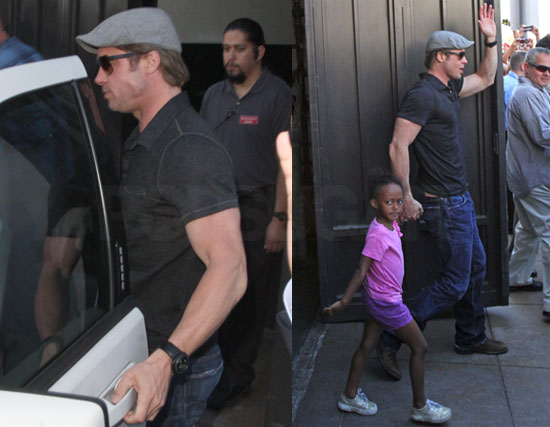 Oscars
Brad Pitt on His Acceptance Speeches: "I Definitely Write Them"
by Whitney Friedlander 2 weeks ago

Oscars
Brad Pitt Won His First Acting Oscar, but This Isn't His First Academy Award
by Stacey Nguyen 2 weeks ago

Ashley Graham
Ashley Graham on Experiencing the Ring of Fire: "I Could Feel His Head in Between My Legs"
by Murphy Moroney 2 weeks ago