Carey Mulligan traded her signature ladylike look for casual TEXTILE Elizabeth and James to meet a friend for lunch at Pastis in NYC yesterday. She's in the city promoting Never Let Me Go, which she premiered alongside costar Andrew Garfield on Wednesday after taking the film to the TIFF. She surprised some lucky fans at two special screenings of the movie this week, and she'll get up close and personal with another theater full of people at a third tonight. Carey's switching gears to hit the red carpet for Wall Street: Money Never Sleeps on Monday where she'll be joined by boyfriend Shia LaBeouf, who spent the week shooting Transformers 3 in Detroit, and Michael Douglas, who is also expected to attend. 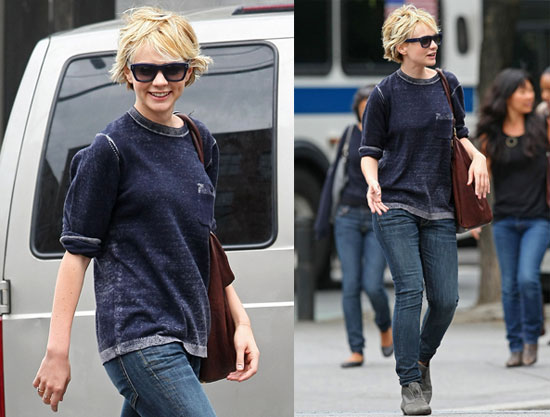 Oscars
Carey Mulligan's at the Oscars, and All I'm Saying Is, If Princess Belle Wore a Crop Top . . .
by Sarah Wasilak 4/25