Newlyweds Carrie Underwood and Mike Fisher both had eye-catching jewelry on their left hands as they made their way through LAX headed off on their honeymoon yesterday. Carrie fiddled with her new band, but wasn't wearing her big diamond engagement sparkler. They were among the three celebrity twosomes who now share July 10, 2010 as their wedding anniversary. The country sweetheart — who is apparently already signing her name Carrie Fisher — and her hockey playing man had their special ceremony in Greensboro, GA on Saturday. They made a quick stop in LA on Sunday before heading off to enjoy their time together as husband and wife. Carrie is also doing well in our bikini bracket so if she's headed to the beach some two-piece relaxation may be in order. Congrats to the happy couple! 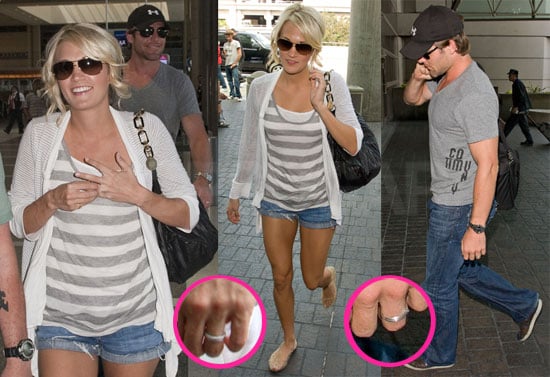