David Beckham switched gears from being the one on the field to standing on the sidelines yesterday to watch as his oldest son, Brooklyn, played soccer in LA. Despite the rainy weather, David was there to congratulate Brooklyn after his game and say hi to some of the other players. David seems to have passed down a love of sports to his children — Cruz even kicked the ball around at practice on Sunday. Becks isn't the only one who has skills to teach Brooklyn, Romeo, and Cruz, though. Romeo's rumored to have secured a deal to start a sunglasses line, and his designing woman mom, Victoria, will be around to offer her expertise. 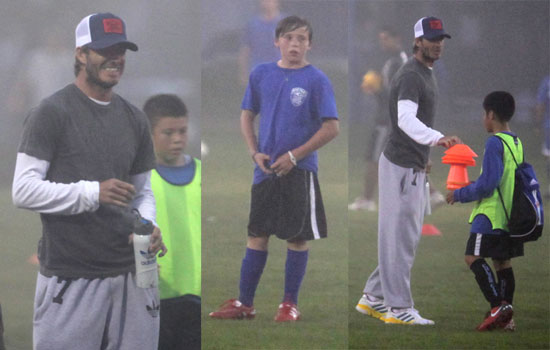 Kate Hudson
Kate Hudson's Toddler Loves Her Style, So She's Saving Her Outfits For Her 16th Birthday
by Chanel Vargas 1 day ago

Jennifer Lopez
Jennifer Lopez Captured 3 Generations in 1 Gorgeous Photo, and We Can't Look Away
by Alessia Santoro 1 day ago