Ed Westwick looked quite scruffy yesterday when he arrived at the airport in Sydney. He headed Down Under in order to make promotional appearances on behalf of Virgin Mobile, during which he chatted with PopSugar Australia. Ed was home in England just a few weeks ago hanging out with Jessica Szohr, but he still insists that he's a single man. He also opened up about a lighthearted rivalry with his fellow Brit Robert Pattinson, though Rob's girlfriend, Kristen Stewart, apparently isn't Ed's type. There's lots more on PopSugar Australia, like his thoughts about chest waxing and Taylor Momsen. Here are highlights: 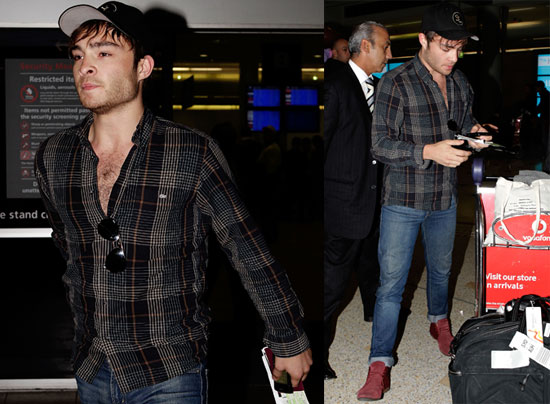 PopSugar Australia: You told BBC Radio earlier this month that you were single—is that still the case?
Ed Westwick: Aww, I mean you know. It's a little like this and a little like that. Look, I’m 23. How tied down can somebody be at 23 these days?
PS Australia: Do you have any celebrity crushes?
EW: Yeah, but they’re all married! Scarlett Johansson is always one. Miranda Kerr is kind of one, but somebody told me she just got engaged. I like the older ones, the ones around my age, the Kristen Stewarts of the world don’t really do it for me. I’m a man with the eye on the older girl, I’m afraid.
PS Australia: Who has the best American accent—you or Robert Pattinson?
EW: Me.

To read the rest of what Ed had to say, check out the full interview!