Gael Garcia Bernal shared the happy news on Saturday that he and girlfriend Dolores Fonzi are expecting their second child, and yesterday they took a stroll in Buenos Aires to celebrate with their 20-month-old son, Lazaro. The family is in Dolores's home city during a break from work for Gael, who appeared on the big screen earlier this year in the critically underwhelming movie Letters to Juliet. Gael has another shot at film success, though, in Will Ferrell's upcoming Spanish-language comedy. The movie will see Gael reunite with his real-life BFF, Diego Luna, who's also turning out to be quite a family man. 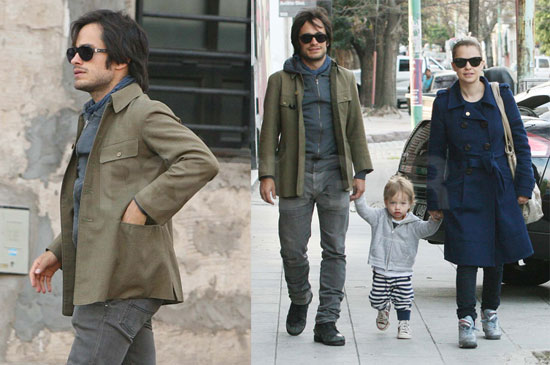 Kylie Jenner
Kylie Jenner and Stormi Wore Matching Rainbow Bikinis, and It's Too Cute to Handle
by Nikita Charuza 2 days ago

Celebrity Pregnancies
Another Baby in the Mix! Perrie Edwards and Alex Oxlade-Chamberlain Are Expecting Their First Child
by Navi Ahluwalia 1 day ago

Cardi B
Oh My, Monochrome! Cardi B's New "Mommy & Me" Reebok Collection Was Inspired by Kulture
by Chanel Vargas 3 days ago

Kate Hudson
Kate Hudson's Toddler Loves Her Style, So She's Saving Her Outfits For Her 16th Birthday
by Chanel Vargas 5 days ago