Gwyneth Paltrow spent her Fourth of July holiday in London at the Wireless Festival in Hyde Park. She and her husband Chris Martin were together last week to see a Kings of Leon show, but she joined pal Beyonce Knowles and other stylish celebs to check out Jay-Z's Sunday performance. Beyonce and Jay-Z were back in England once again following his appearance at the Isle of Wight, as their Summer of traveling together continues. Madonna also came out for the musical event, and she shared some PDA between songs with her boyfriend Jesus Luz. Jay-Z wasn't your top pick as a shirtless date to an Independence Day beach party, but he was the lucky guy who got to spend the holiday with Beyonce, Gwyneth, and Madonna. 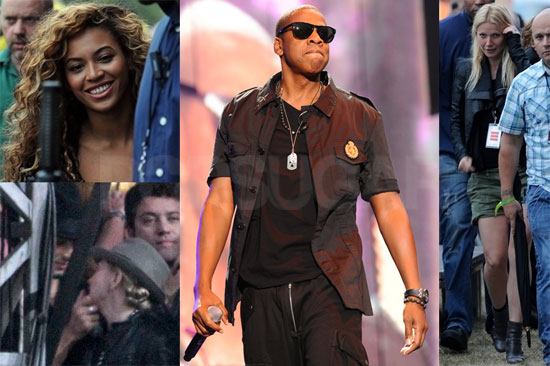