Halle Berry and Gabriel Aubry showed Nahla the sights, like the London Eye and the changing of the guard at Buckingham Palace, in the UK city yesterday and today. Nahla sported a bright yellow raincoat, though it didn't look to be coming down too hard, as her parents each held a hand and swung her down the sidewalk. She also got a ride on dad's shoulders and in mom's arms. The trio have been in South Africa for the past few weeks while Halle sports sexy bikinis swimming alongside sharks filming Dark Tide. Halle opened up in her September Vogue about coparenting with Gabriel despite no longer being romantically involved, which seems to be going well for the family. Gabriel meanwhile continues to be quite easy on the eyes as most of you agreed with his recent shirtless sheet ads. 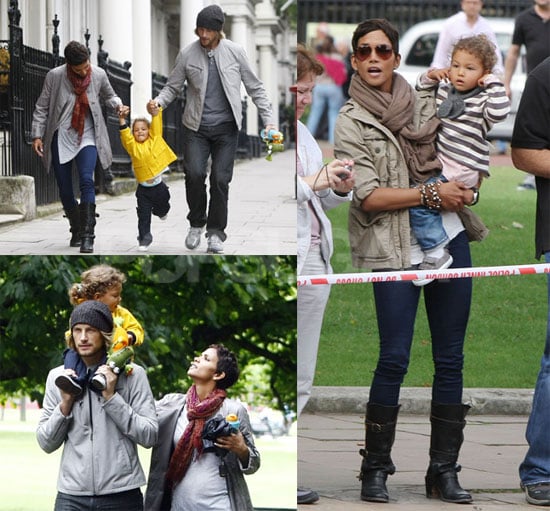 Meghan Trainor
Here's What We Know About Meghan Trainor and Daryl Sabara's Son — Plus His Cutest Photos!
by Alessia Santoro 1 day ago

Mandy Moore
Mandy Moore Is a Mama! Meet Her and Taylor Goldsmith's Son, August
by Alessia Santoro 3 days ago

Celebrity Instagrams
Jennifer Lopez's Twins Are 13! See How She and ARod Celebrated the Big Milestone
by Murphy Moroney 4 days ago