Halle Berry found graffiti of Gandhi at her LA home on Friday, but that didn't get in the way of her flying out of LAX on Saturday with Gabriel Aubry and their daughter Nahla. Despite splitting nearly three months ago, Halle and Gabriel appear to be keeping things civil by still enjoying outings as a trio. Halle's spent time since their breakup showing off her amazing body at the beach, though she was just knocked out of our Summer Bikini Bracket. We're now down to the Final Four — make sure to fill out your ballot and choose between Katy Perry, Jennifer Aniston, Brooklyn Decker, and Jessica Alba! Halle won't be number one in our contest this year, but she did just win the lead in an upcoming comedy about footwear obsessed friends. 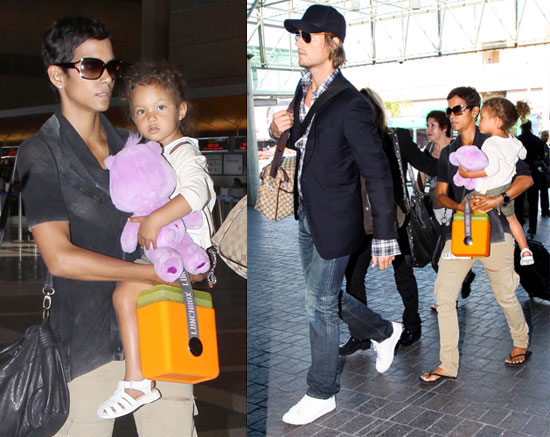 Baby Names
Gigi Hadid Just Subtly Revealed Her Baby Girl's Name, and It's So Beautiful
by Yerin Kim 4 days ago

Kamala Harris
Everything We Know About Meena Harris's 2 Kids, Amara and Leela
by Alessia Santoro 5 days ago