Justin Timberlake and Jesse Eisenberg joined their The Social Network costars Andrew Garfield and Armie Hammer on Friday for their premiere during NYC's Lincoln Center Film Festival. They posed on the red carpet and attended a screening before moving on to the afterparty at the Harvard Club, where JT stuck close to his mother, Lynne, and happily posed for photos with fans before calling it a night around 1 a.m. The guys were back together on Saturday to attend an early press conference with the movie's writer, Aaron Sorkin. They chatted about their own level of expertise with computers and touched on the real-life people who are now portrayed on the big screen. Stay tuned for more to come from the conversation this week on Geek and Buzz, but check out a preview of what Jesse and Justin said below. 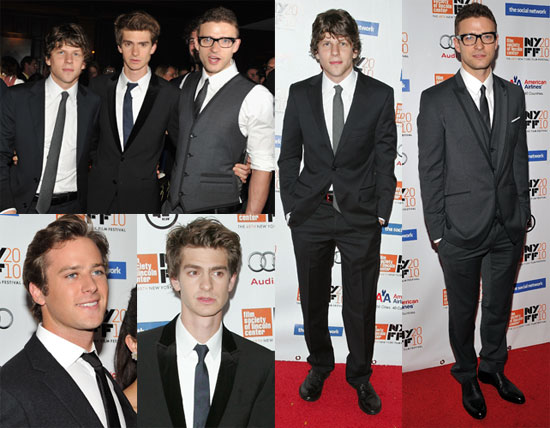 To see more of the guys, just read more.