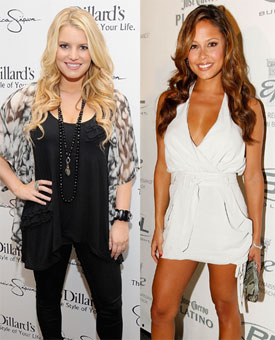 Jessica Simpson ran into her ex-husband, Nick Lachey, and his partner Vanessa Minnillo last week while out with her boyfriend Eric Johnson, and when recently asked about their near miss she acknowledged being in the same place but commented that nobody said hello. That may be true, but a source at the restaurant alleges that Jess had a few words to share on dining near Nick and Vanessa nonetheless. She supposedly told her server, "I hope Vanessa likes her clothes because I bought them for her, since Nick took all my money." Jess is known to speak her mind, so tell us what you think of her rumored statement — hilarious or ridiculous?