George Clooney wore a fake nose and giant ear to join funny guys like Jon Stewart and Zach Galifianakis in LA last night to answer phones and collect more than $3 million during Comedy Central's Night of Too Many Stars: An Overbooked Concert For Autism Education. Jon was there live after playing host three weeks ago, when he and friends like Tina Fey, Jimmy Fallon, and Ricky Gervais recorded the actual special at NYC's Beacon Theater. Zach was able to attend during a break from shooting The Hangover 2, which will no longer feature a cameo from Mel Gibson and instead will have a special appearance from Liam Neeson. George's latest philanthropic gesture follows his goodwill trip to Sudan and last week's meeting with President Obama. He was also front and center for January's Hope for Haiti Now telethon, which raised more than $57 million. 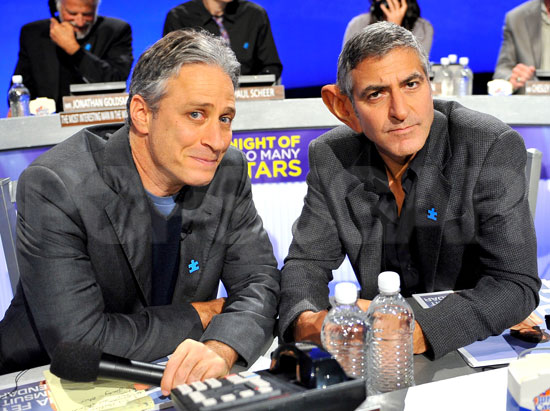 Parenting Humor
George Clooney on His Twins Speaking Fluent Italian at 3: "We Did a Really Dumb Thing"
by Alessia Santoro 4 hours ago