Joshua Jackson and Diane Kruger fit right in with the fashionable crowd while window shopping in SoHo, NYC yesterday. Diane treated herself to ice cream, but Josh was content with just the sweet blonde on his arm. The contenders for cutest couple in Hollywood have been inseparable as usual lately — amid all their award season red carpets, she filmed a cameo on Fringe and they recently shared an adorable PDA filled evening at Canada's Genie Awards. Hopefully, Josh has a break in his schedule so he can accompany her to Cannes where her next French film, Lily Sometimes, will be debuting at the Director's Fortnight film festival. 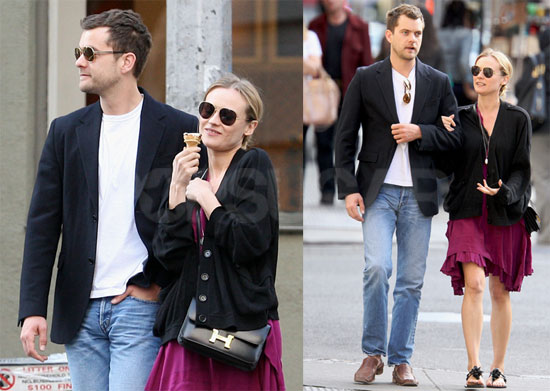 Celebrity News
Yep, Jodie Turner-Smith and Joshua Jackson Are So in Love, They High Five Each Other About It
by Chanel Vargas 3 weeks ago