Russell Brand and Katy Perry were spotted this morning, on her 26th birthday, heading to a flight out of India's Jaipur airport. They apparently headed off for their honeymoon in the Maldives after a whirlwind weekend of wedding celebrations, which kicked off with a safari at the Ranthambore National Park. The pair tied the knot on Saturday in a traditional Indian ceremony, but with a Christian minister. Katy is thought to have worn a variety of dresses on her big day, with the most elaborate being a gray haute couture gown from designer Elie Saab. Some details have emerged, however, including a story about how Katy made a toast at their dinner that went on for 30 minutes and included a bit about how she and Russell were likely together in a past life. It sounds like an elaborate, special weekend and quite expensive, just as Russell promised — congrats to the newlyweds! 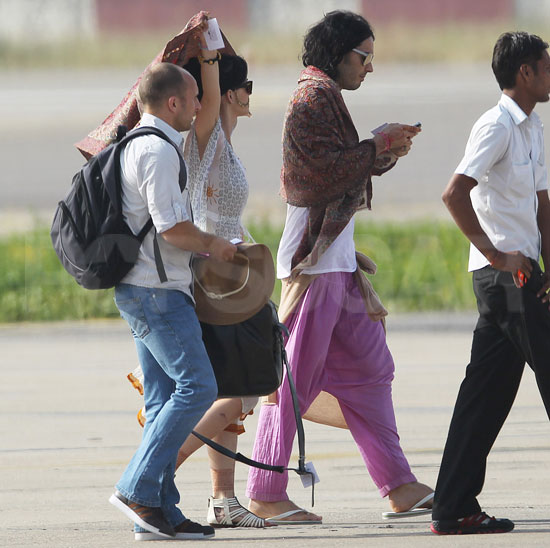 Jordan Fisher
Jordan Fisher and Ellie Woods Recall Their Magical Disney Wedding: "It Was So Romantic"
by Kelsie Gibson 15 hours ago

Gwen Stefani
Gwen Stefani's First Wedding Dress Was Dip-Dyed Pink — What Will She Surprise Us With Now?
by Sarah Wasilak 10/28