Justin Timberlake had a weapon in each hand on the LA set of Now yesterday. Amanda Seyfried was also on hand for the scene after they filmed together in a different location last week. Justin's attention has been focused on making movies lately, but he recently assured his fans on The Ellen DeGeneres Show that he does have plans to get back to music eventually. He explained that he just, "lacks the ability to do two things at the same time." Watch his interview below! New JT music may be a long way away, but we'll be able to hear his voice on the big screen when Yogi Bear hits theaters on Dec. 17, just a few days before his William Rast for Target collection debuts in stores. 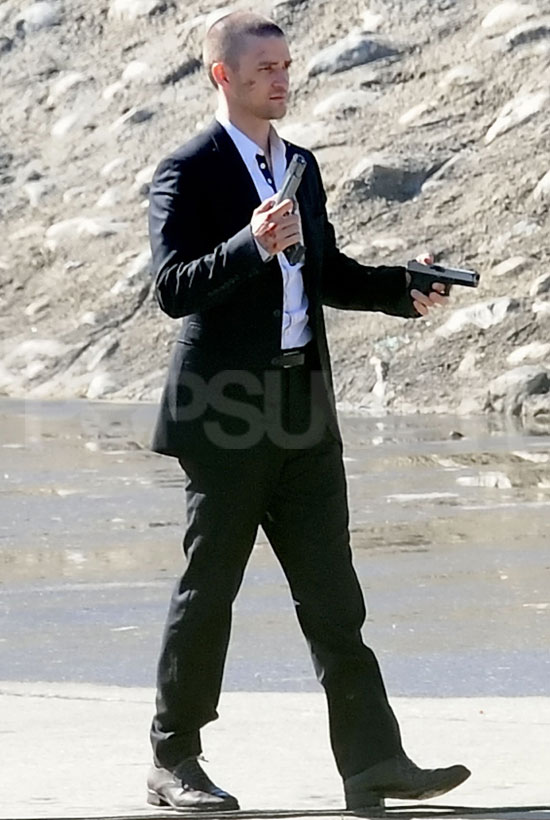 Justin Timberlake
Justin Timberlake and His Son Silas's Disney World Trip Took Them to a Galaxy Far, Far Away
by Karenna Meredith 19 hours ago
Harry Styles
We're Not at All Jealous of These Pics of Emma Corrin and Harry Styles Filming My Policeman
by Grayson Gilcrease 4 days ago
Hulu
Lily James Brings Back Baywatch as Pamela Anderson in New Pam and Tommy Set Photos
by Kelsie Gibson 1 day ago

The Ellen DeGeneres Show
Jessica Biel Talks About the "Wild, Crazy, Fun Ride" of Parenting 2 Boys With Justin Timberlake
by Karenna Meredith 3 weeks ago
Nicole Kidman
Nicole Kidman and Javier Bardem Get Into Character on the Set of Being the Ricardos Film
by Kelsie Gibson 2 weeks ago