Katy Perry and Russell Brand were out and about in LA Thursday with their coffees. They reunited on the West Coast after Russell returned from NYC, where he was busy shooting Arthur in his latest crazy costumes. Katy wore her own bold outfit to the VMAs last weekend, and Russell was there in spirit on her nails. She and Russell are looking forward to Fall and their rumored wedding, though Katy ruled the Summer with her hot jams. They were ready to take another trip together from LAX yesterday, but their takeoff was derailed — Russell was placed under a citizen's arrest after allegedly attacking a photographer. Katy defended Russell's actions with a sweet Tweet, writing to the paparazzo, "If you cross the line and try an put a lens up my dress, my fiancé will do his job and protect me." 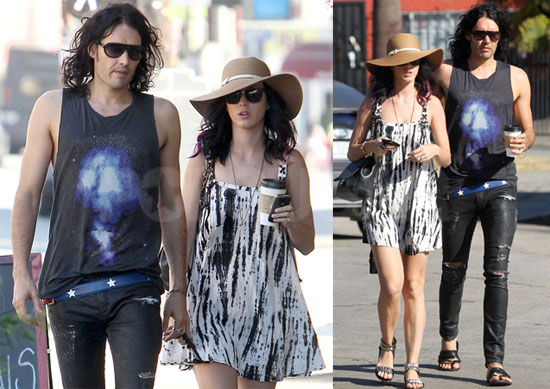