Dax Shepard squeezed his adorable fiancée, Kristen Bell, while out to coffee with their friend Justin Long in Studio City, CA, yesterday. She has been on location with John Krasinski and Drew Barrymore filming Everybody Loves Whales in Alaska, which may account for Kristen's afternoon of PDA with Dax. She'll be commuting home more in the coming month to promote Burlesque alongside that star-studded cast ahead of its Thanksgiving release. Dax, meanwhile, is more and more endearing every week on Parenthood and is trying to find a distributor for his directorial debut, Brother's Justice. Kristen fans would love to see her back on the small screen as well and are trying to land her a role in the upcoming reboot of The Munsters, though the first tongue-in-cheek scary role on her docket is her cameo in Scream 4. 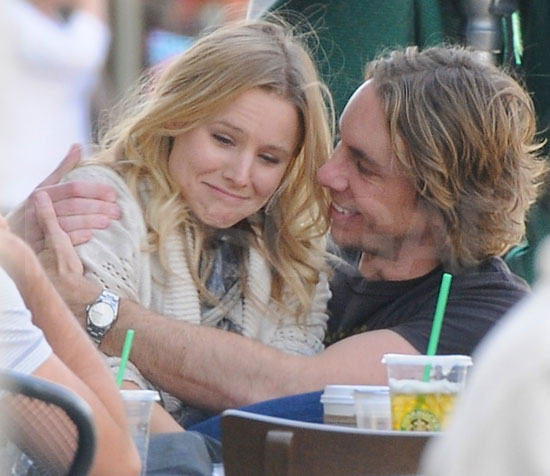 To see more of the happy couple, just read more.

Kristen Bell
Kristen Bell on Keeping Her Kids' Faces Off Social Media: "I Don't Know If They Will Want That"
by Alessia Santoro 1 week ago