Famous basketball fans headed to LA's Staples Center last night to watch as the Lakers beat the Celtics in game six of the NBA finals. Leonardo DiCaprio didn't take in the last few match-ups in Boston with Massachusetts fans like Tom Brady, but he was back out yesterday to support his favorite team. Joining Leo was First Lady Michelle Obama, who made special plans to attend after a day of meetings in California. Megan Fox and Brian Austin Green kept their heads down on their way inside, but they have some celebrating to do — they're apparently engaged again! Lenny Kravitz, meanwhile, was happy to smile and wave for fans. Christina Aguilera treated the stadium to the national anthem, afterward joining her husband, Jordan Bratman, to cheer on their hometown players. 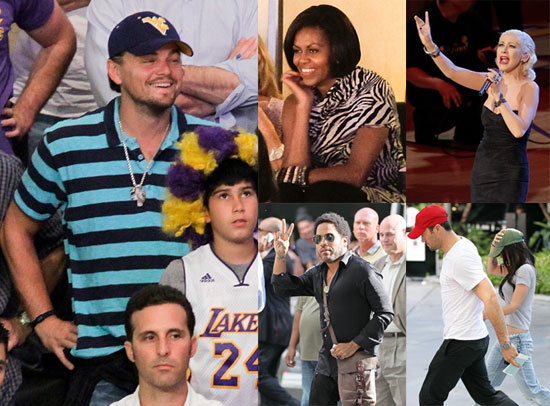