Matt Damon and his pregnant wife Luciana were together yesterday to catch a flight out of NYC with their children. The Damon clan has been in the Big Apple for the last few weeks as Matt finished up work on The Adjustment Bureau and tended to his charity work. He was also among the hot dads who celebrated with his family on Father's Day — he got a well-timed present in the form of a new role in Cameron Crowe's next movie. Matt, Luciana, and their girls usually sneak off to enjoy Fourth of July fun with his BFF Ben Affleck, and the guys are expected to reunite for an annual poker tournament in LA. The Damons also tend to fit in a trip to Hawaii, so hopefully they'll enjoy another fun getaway before becoming a family of six. 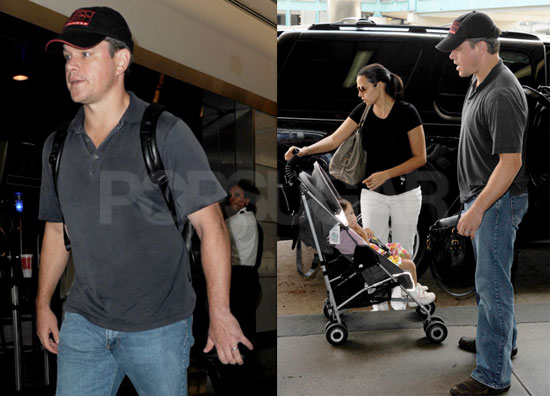 Celebrity Pregnancies
Jessica Marie Garcia Is Pregnant With Her First Child: "We Are Over the Moon Excited"
by Victoria Messina 3 weeks ago