Matt Damon and Clint Eastwood teamed up for the current cover of Men's Journal. The actor and director opened up about their new film Hereafter, which they've promoted together on The Early Show and at their NYC premiere. In addition to the movie's release, October was a major month for Matt personally — he just welcomed his baby girl Stella and turned 40 on Oct. 8. He and Clint, who is now exactly twice Matt's age, showed off their rapport in the interview as they discussed their friendship and filmmaking philosophies. They said: 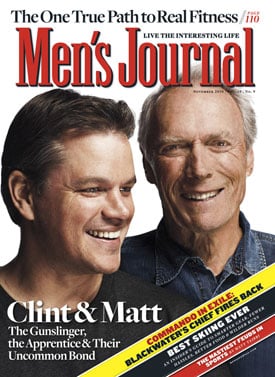 Clint EastwoodMatt Damon
Around The Web