Matt Damon and Luciana hit the beach for another afternoon in the Hawaii sun yesterday. He's been working on his surfing skills during the family vacation and kept his upper body covered in his rash guard for snorkeling with Isabella. He held onto his daughter's hand as they navigated any slippery rocks on the way back to join mom. A very pregnant Luciana stuck on the sand in her maternity bikini, which she also sported for a waterfall swimming adventure last week. So far the Damons haven't been joined by their friends the Afflecks, though now that Matt's movie The Adjustment Bureau has been pushed back, perhaps they'll extend their getaway even longer. 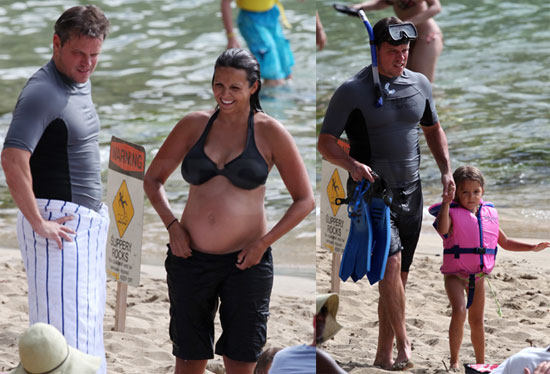 Jennifer Lopez
Jennifer Lopez Captured 3 Generations in 1 Gorgeous Photo, and We Can't Look Away
by Alessia Santoro 2 days ago

Kendall Jenner
Kendall Jenner's Hibiscus-Print Bikini Is Still in Stock, but Don't Quote Us on That Later
by Sarah Wasilak 2 days ago

Celebrity Instagrams
The Highlight of Tracee Ellis Ross's Beach Party For One? Her High-Waisted Lounge Pants
by Chanel Vargas 3 days ago