Matthew McConaughey showed off his muscles in a tight tank on the downtown LA set of The Lincoln Lawyer yesterday. He's been working on the film for the last few weeks alongside Ryan Phillippe, who's also flaunted his fit form in front of the cameras. Both men will be part of the competition when our Hottest Shirtless Guy Bracket kicks off soon — the tournament also includes last year's finalist Kellan Lutz. Going without a shirt clearly runs in the McConaughey family, as Levi wore only shorts for a stroll in Malibu with his grandmother, sister Vida, and dog as his dad was busy with work. 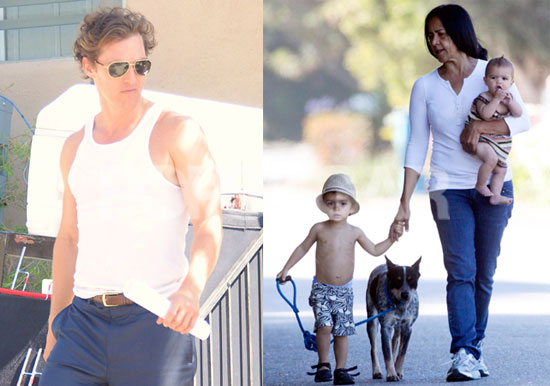 Chrissy Teigen
Reporting From Chrissy Teigen's Living Room, Here's Luna Stephens With the News: "Nothing!"
by Chanel Vargas 2 weeks ago