It was an exciting night for some of music's biggest stars in NYC yesterday at the seventh annual Black Ball, held to benefit the Keep a Child Alive charity. Alicia Keys, the host and cofounder of the organization, flaunted her growing baby bump on her way into the event with husband Swizz Beatz. She joined Jay-Z on stage to perform Frank Sinatra's "New York, New York" before the duo closed the show with their own ode to the city, "Empire State of Mind." Beyonce Knowles showed off her stuff at a recent New Jersey block party, but she let her husband do the entertaining last night as she watched from the crowd in a glamorous pink gown. The couples were together with their men last month as well at the Rock the Bells concert, shortly after Alicia and Swizz returned from their bikini-filled French honeymoon. Jennifer Hudson, showing off her fit frame, Whitney Houston, and Usher rounded out the evening's talented crowd. 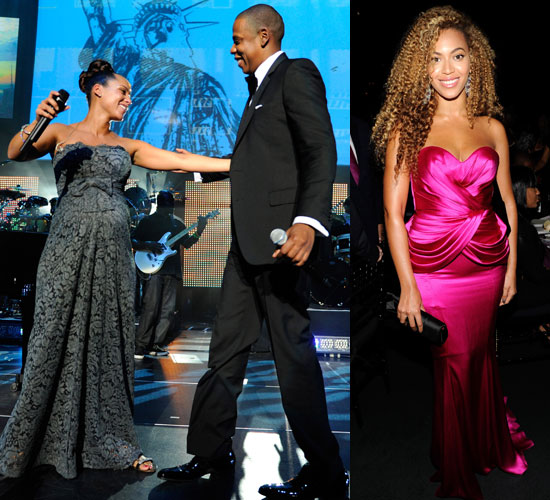 To see more from the ball including Whitney Houston, Jane Krakowski, and more, just read more.