Angelina Jolie is currently in LA spending time with her kids, but she broke from working on The Tourist during her stay in Venice to chat with Vanity Fair about her upcoming film Salt. She's on the front of the magazine's August issue, which will be available in LA and NYC this Wednesday and then nationwide on July 6. Angelina spoke about her children's unique gifts and how Shiloh thinks she's boy, also revealing her desire to someday stop being a sexy screen siren. She said: 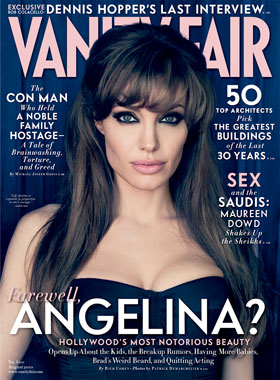 Angelina Jolie
What's Going On With The Weeknd and Angelina Jolie? An Investigation
by Monica Sisavat 4 hours ago