Reese Witherspoon and Jon Hamm were the guests of honor last night at a benefit held for the LiveStrong Foundation in LA. Jon, who showed off a new crop of facial hair, posed for photos with girlfriend Jennifer Westfeldt, while Reese met her man, Jim Toth, inside. She changed into a chic black dress and blazer for the event after her afternoon of running errands solo in red. Jon is back on the West Coast following a few weeks of traveling the world, with stops in Venice, Toronto, Boston, and NYC to promote his big box-office-winning movie The Town. He has another film arriving in theaters this weekend with Howl, and Jon's sharing the promotional load with costar James Franco. Jon made an appearance on The Late Late Show yesterday to chat about his projects — check out the interview after the jump. 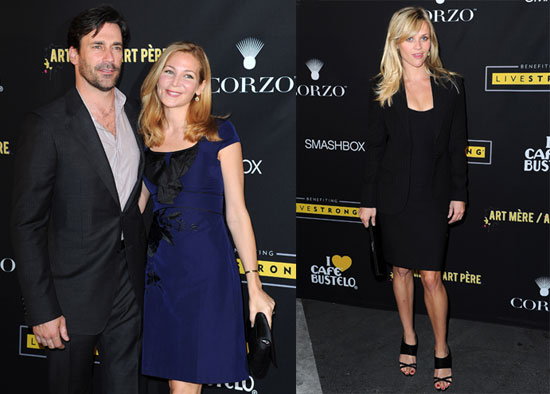