Rihanna wore a stomach-baring Alexander Wang sports bra as she touched down in Oahu and got straight to work on the movie Battleship yesterday. It will be the singer's big-screen debut, and she'll be in good company in the adaptation of the popular board game, working alongside sexy costars like Alexander Skarsgard and Taylor Kitch. The shoot comes at the tail end of a busy Summer for the singer, who got lots of attention for her role in Eminem's controversial Love the Way You Lie video, spent lots of time with her baseballer boyfriend Matt Kemp in LA, and jet setted around the globe, performing everywhere from Toronto to Spain in recent months. Now we'll hopefully get a glimpse of her alongside her hot castmates in Hawaii! 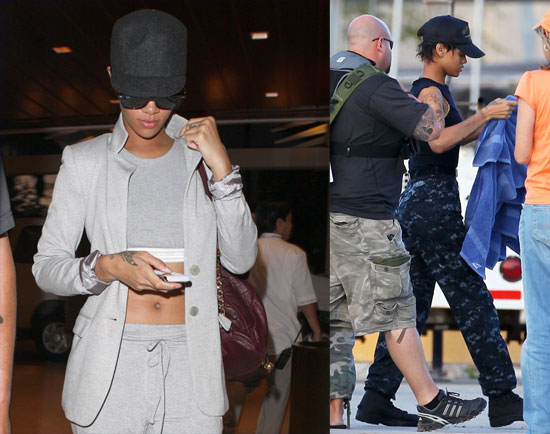 Rihanna
Rihanna's Badass Suit Reminds Us Tie-Dye Is Here to Stay, and It's Not Just Limited to Sweats
by Yerin Kim 10/30