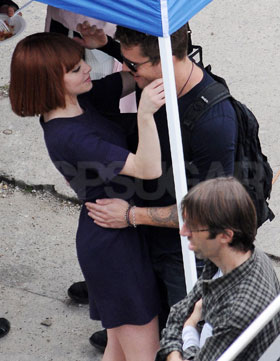 Ryan Phillippe gave Amanda Seyfried a big hug when he stopped by the set of Now yesterday in LA. He's been busy jetting between the West Coast and Michigan lately to work on Setup, leaving Amanda free to focus on her steamy shoots with Justin Timberlake. Ryan, though, appears to be Amanda's real-life leading man. The pair were first spotted together at Kate Hudson's Halloween party and have since taken their romance public with concert dates and shopping trips. Ryan's moving on with his personal business after his ex Reese Witherspoon announced her engagement, and we're curious what you think of his dating Amanda. So, tell us what you make of their PDA — super sweet or still surprising?

Amanda Seyfried
Amanda Seyfried on How Women Are Forgotten Postbirth: "It's Grim, but It's the Reality of Motherhood"
by Kate Schweitzer 10/27