Salma Hayek gave her daughter, Valentina, a lift yesterday as the pair left preschool in LA. Valentina headed back to class this month after spending lots of time with Salma over the Summer. The girls were seemingly inseparable all season as they traveled to NYC and ran everyday errands around town. They even paid a visit to Disneyland, where Valentina may have picked up her Tinkerbell backpack. Salma has made the most of her break from work by spending quality time with her daughter, but she'll be back on the big screen soon. She's signed on to play Kitty in the Shrek Forever After follow-up film, Puss in Boots, but not before she celebrates another special milestone with Valentina — today is her little one's third birthday! 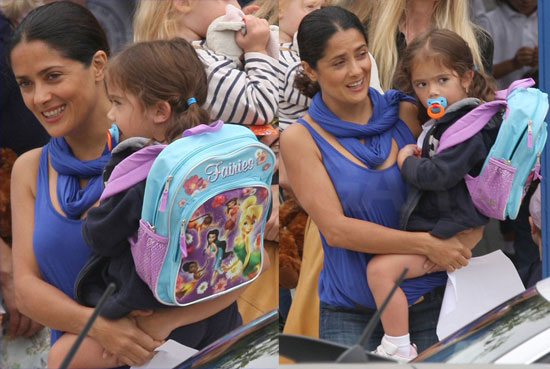 Kylie Jenner
Kylie Jenner and Stormi Wore Matching Rainbow Bikinis, and It's Too Cute to Handle
by Nikita Charuza 4 hours ago

Cardi B
Oh My, Monochrome! Cardi B's New "Mommy & Me" Reebok Collection Was Inspired by Kulture
by Chanel Vargas 1 day ago

Jennifer Lopez
Jennifer Lopez Captured 3 Generations in 1 Gorgeous Photo, and We Can't Look Away
by Alessia Santoro 4 days ago