Sandra Bullock made a surprise appearance and led the roster of stars who turned out in Tennessee last night for the Nashville Rising concert benefiting victims of the recent floods there. She stuck close to her The Blind Side costar Tim McGraw, who arrived with his wife Faith Hill. Taylor Swift wrapped up her bikini-filled getway to the Bahamas in order to attend, while Miley Cyrus covered up after her latest scantily-clad performance at Sunday's MuchMusic Awards. Carrie Underwood was also among the evening's performers, but Sandra was the one who stole the show. She took the stage with a guitar for a rendition of "Smoke on the Water," but after playing a few notes said, "I can't play for crap!" It was the latest evening of celebrity philanthropy after Monday's telethon for the Gulf Coast, with Sandra and her friends raising more than $2 million for their cause. 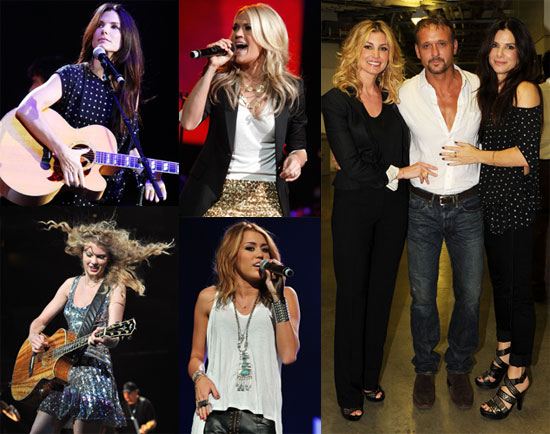 To see more from the concert, just read more.