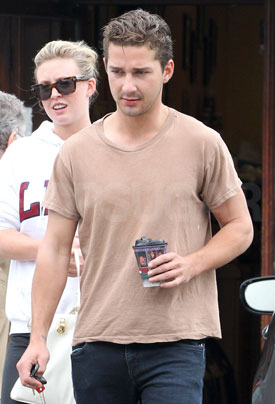 Shia LaBeouf was spotted grabbing lunch with a friend in LA yesterday as news of his rumored breakup with Carey Mulligan began circulating. The pair began dating last Fall on the set of Wall Street: Money Never Sleeps and continued seeing each other into the Spring when they reunited with costars Michael Douglas and Josh Brolin at the Cannes Film Festival. Though Shia and Carey never paraded their relationship in front of the media, they were extremely affectionate away from the press. Since briefly reuniting last month at the premiere of Wall Street, Shia's been keeping himself occupied on the set of Transformers 3 while Carey's been busy promoting Never Let Me Go. With busy schedules keeping them apart, are you surprised Shia and Carey didn't last?

Oscars
Carey Mulligan's at the Oscars, and All I'm Saying Is, If Princess Belle Wore a Crop Top . . .
by Sarah Wasilak 4/25