Tom Cruise shared a shirtless moment in LA on Friday while shooting an ad for ESPN with Cameron Diaz. The duo will log lots of time side by side in the coming weeks as they prep for the release of Knight and Day on June 23. Their promotional efforts include viral videos, and the pair was front and center in one released last week that features Tom's impressive soccer skills. His fancy footwork won't land him a position playing in the World Cup, but his moves did come in handy during his Les Grossman dance routine at the MTV Movie Awards. The bringing back of Tom's Tropic Thunder character resulted in a new film deal, but the next few weeks will be all about getting word out about his Summer blockbuster with Cameron. 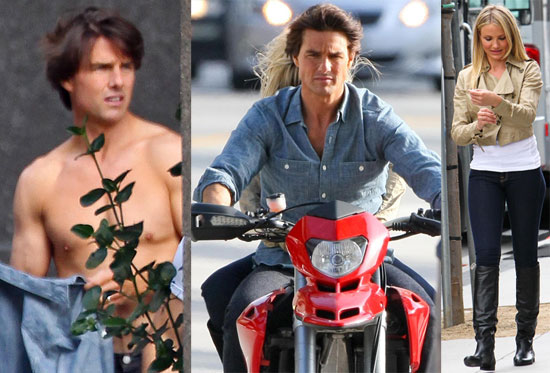