Calvin Klein underwear models Kellan Lutz and Zoe Saldana posed together at the fashion line's event in Berlin last night, though it was one brand-new sparkly accessory — her engagement ring! — that stood out on the red carpet. The gorgeous actress sported a one-shouldered dress after stripping down to almost nothing for her sexy lingerie ads. Zoe and Kellan both kept the formal wear on for this photo op, especially since she couldn't quite flash her Calvins as easily as her male counterpart. He brought his girlfriend AnnaLynne McCord to Germany after the two recently made their most public appearance ever at his Eclipse premiere. Diane Kruger arrived in a white dress, which was much shorter and far less formal than the backless CK gown she wore to the Costume Institute Gala. AnnaLynne and Diane are also both currently competing in our Bikini Bracket — McCord is having a hard time against Blake Lively while Diane has a big lead over LeAnn Rimes. 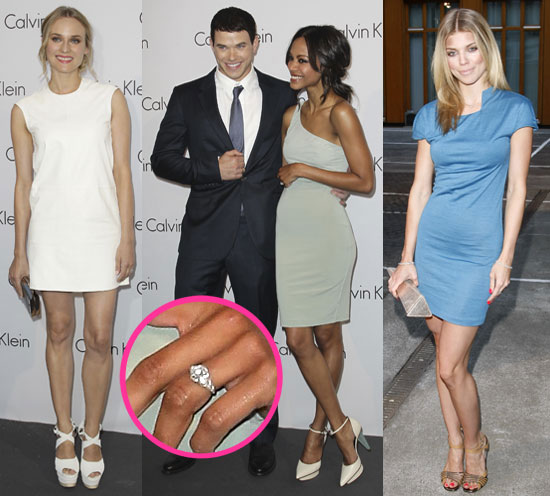