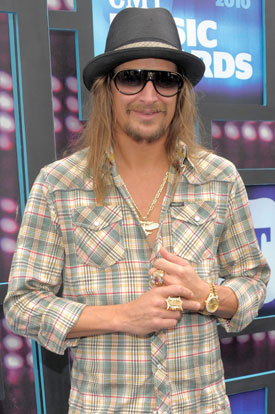 Kid Rock has been occupied over the last couple of days at a trial for his 2007 arrest for brawling at an Atlanta Waffle House. He was in court earlier today testifying as to his account of the evening, and he went into significant detail about how things progressed with his adversary. Kid Rock spoke of how he wasn't satisfied to give the middle finger, so he tried to pull down his pants. He didn't succeed, though, because he couldn't unlatch his custom steer head belt buckle. In his own words, "I couldn't do what I wanted to do and give him the full moon." It's a pretty preposterous situation to start with, but tell us what you think about Kid Rock's account of his partial mooning in court — hilarious or gross?