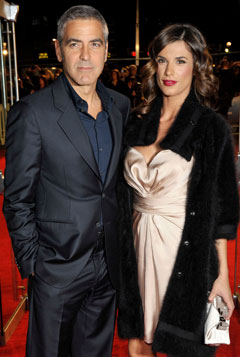 George Clooney and Elisabetta Canalis got people talking over the weekend when she was spotted showing off a large piece of jewelry at dinner in Italy. His rep cleared things up and said that she was simply goofing around with a napkin ring. George might not have asked for Elisabetta's hand in marriage just yet, but they're still going strong after hitting the one-year mark. She's increasingly happy to gush about him in public, but George is still known as Hollywood's reigning bachelor. They seem to be very much in love, but tell us — would you be surprised if George popped the question?