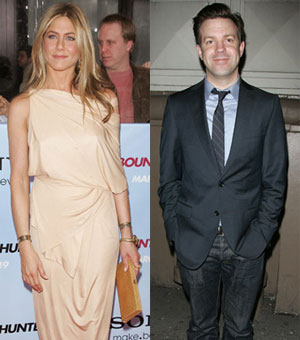 Jennifer Aniston's love life rarely has a quiet moment, but she actually hasn't been linked to anyone since Gerard Butler during award season. This week, rumors emerged about a possible romance with SNL funny guy Jason Sudeikis, who had a small part opposite Jen in The Bounty Hunter. Jennifer and Jason are teaming up again for the film Horrible Bosses, which is the project in which Jen will show some "aggressive sexuality." Jen's rep denied that she's dating recently divorced Sudeikis, but this probably won't be the end of stories about the two. So, tell us —  are you excited for a new round of Aniston romance rumors?

Nostalgia
Harry Styles and Rachel Green Own the Same T-Shirt — Don't You Want One, Too?
by Sarah Wasilak 1 day ago