While the news was dominated by a certain pregnancy announcement, there were lots of other super celebrity parents out this week. Mom-to-be Nicole Kidman celebrated with Keith Urban at the CMT Awards in Nashville, while Jennifer Lopez left her kids at home for date night with Marc Anthony. On the West coast, Heidi Klum enjoyed family time with her kids. Were you paying attention to everything else that went down? 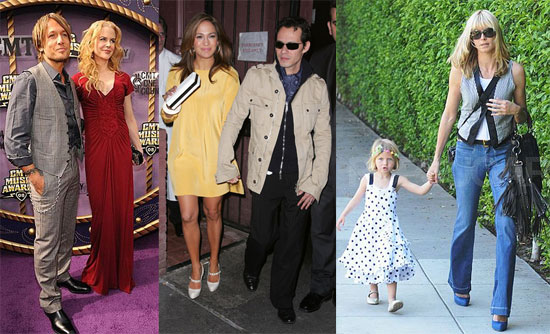 Which LA store was rumored to be mad at Victoria Beckham for not properly promoting her denim line?

Natalie Portman will star in the film version of which classic novel?

Jake Gyllenhaal was seen receiving which service on the set of Nailed?

At which LA restaurant did Posh celebrate her 34th bithday with friends on Wednesday?

Who said that if they weren't acting they would have, "wanted to be a zoologist, to study the sociology of animals"?

Who talked about her Latina heritage this week?

On what part of his body did John Mayer get a new tattoo?

What is the name of Mischa Barton's boyfriend's band?

Which starlet said that, "the other kids would make fun of the way I dressed because it was so funky and outlandish, and not like anyone else"?

Where on MTV will Nick Lachey guest star next week?