It seems like everywhere you looked this week an award was being handed out, from the Spike TV Guy Awards, where Cameron Diaz walked the red carpet, to the MTV Movie Awards, where Liv Tyler and Sarah Jessica Parker strutted their stuff. Paris Hilton even crossed an ocean to attend the MTV Japan Video Music Awards. Were you paying attention to everything else that went down? Take the quiz! 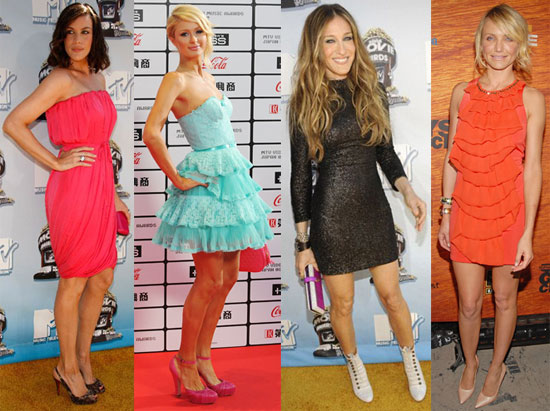 Who won Best Villain at the MTV Movie Awards?

What was the occasion for the party Tom Cruise and Katie Holmes threw last Saturday night?

Kirsten Dunst was spotted shopping at which designer's NYC boutique?

Which actor said about his childhood that, "My parents weren't home because they were working. I'd be at the apartment. . . talking to myself in the mirror and acting crazy. That was my upbringing."?

Who is Spike TV's Guy of the Year?

Kate Hudson attended a fashion party in a NYC garden hosted by which British woman?

What is the birthday surprise Drew Barrymore supposedly has for Justin Long?

Who said, "I don’t know why I wear some of the things I wear. I like wearing crazy things sometimes."?

David Beckham attended the restaurant opening of what chef?

How many different cars did we see John Mayer drive this week?