The fashion parade continued at the Cannes Film Festival this week. Madonna sparkled in her sequined Chanel number at the premiere of her film, while Gwyneth Paltrow channeled a Grecian goddess at the Chopard party and Natalie Portman went long and dark at the Indiana Jones screening. Like last week, all eyes were on pregnant Angelina Jolie as she stepped out for her movie, Changeling. Were you paying attention to everything else that went down? Take the quiz! 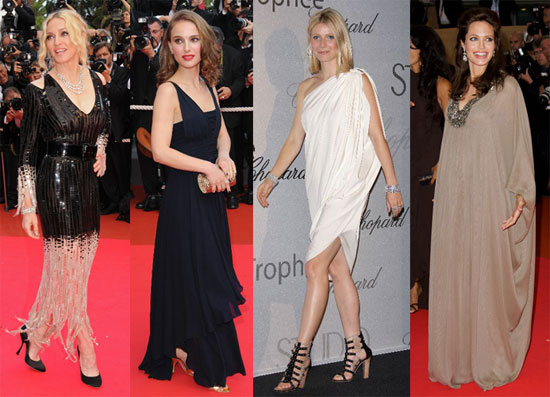 Who was Britney Spears reportedly getting close to while on her Costa Rican vacation?

Who won best female vocalist at the Annual Academy of Country Music Awards?

Will Smith donated $1 million to a school that uses Scientology study methods. What is it called?

Why did Scarlett Johansson supposedly missed the Vicky Cristina Barcelona screening at Cannes?

When talking about her style, who said, "I don't like overdone or being too put-together."?

What did Shia LaBeouf say he learned from Harrison Ford?

Gwyneth Paltrow arrived in which city on Tuesday after leaving Cannes?

How much is Jamie Spears making each week as compensation for his work with Britney?

Jake Gyllenhaal landed a role in the big screen adaptation of which video game?

Fergie performed on which show on Tuesday?