The Cannes Film Festival has ended, which means that our favorite actors were back on set. Kate Hudson joined forces with Anne Hathaway on Bride Wars while Matt Damon was looking goofy for The Informant. Meanwhile, Julia Roberts and Clive Owen were steaming things up in Rome filming Duplicity. Were you paying attention to everything that went down? Take the quiz! 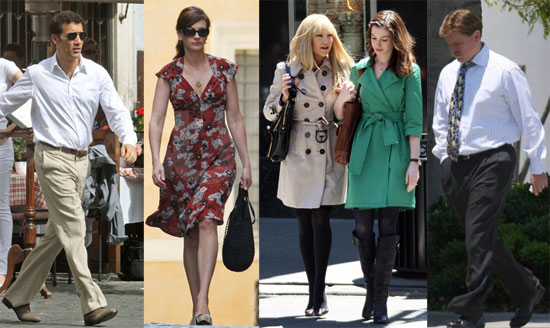 Which fashion house threw a party at Cannes last weekend that brought out Lindsay Lohan, Kate Hudson, and Natalie Portman?

Which celebrity was Jessica Simpson rumored to have cheated on Tony Romo with?

Which starlet said, "I didn't want to be the 'child actress.' Some strange little part of me knew I had to go through those challenging teenage years and not be interrupted by Hollywood?"

Matthew McConaughey's oddly-nicknamed brother will be starring in a new reality show. What name does he go by?

Eva Longoria was back at the branch of which fast food chain where she used to work?

The Affleck brothers were in which country this week to promote their film Gone, Baby, Gone?

Halle Berry showed her affection for which Presidential candidate on her tee-shirt?

Which musician thinks Lindsay Lohan did a "ridiculously fabulous job" on her upcoming album?

Which actor has signed on to join Shia LaBeouf in the next Transformers movie?

Heidi Montag was vacationing in which place when she decided that she's ready to marry Spencer Pratt?